Reviving an economy crippled by lockdown 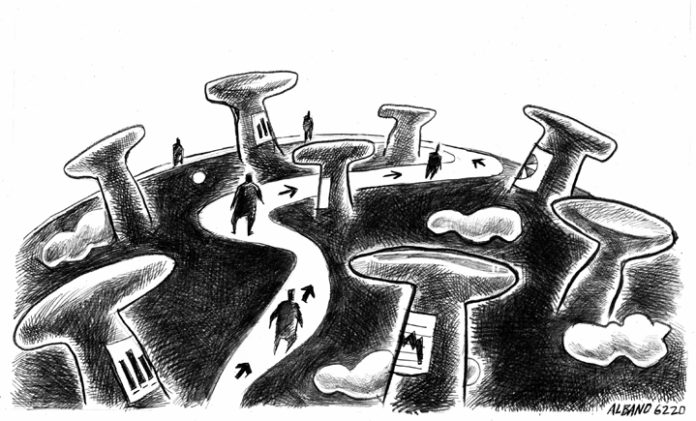 Easing Metro Manila into general community quarantine (GCQ), a softer version of the government’s strict quarantine measures, involves a delicate balance of trying to restart our battered economy without fueling a second wave of Covid-19 infections.

Tax collections slid 61.56 percent year-on-year to P90.5 billion in April, a month when the Bureau of Internal Revenue’s collection usually surges because of the income tax deadline, which had to be extended thrice because of the lockdown. Meanwhile, Customs’ revenues, the government’s second-biggest source of income, are also down 33.38 percent.

Anemic collections have forced the government to borrow more to finance the country’s Covid-19 response program. By year’s end, government is expected to have an outstanding debt level equivalent to 49.8 percent of gross domestic product (GDP).

The Philippine economy shrank 0.2 percent in the first quarter and is projected to have lost as much as P1.1 trillion during the first 45 days of the lockdown, according to government data. New York-based think tank Global Source said the country may post a minimum of 7 percent GDP contraction this year.

Remittances from Filipinos working abroad are usually more than enough to keep the economy afloat, but thousands of OFWs are returning home jobless, while many of those who remain abroad are unable to work or at the brink of losing their employment because of the pandemic.

The World Bank said it sees remittances of migrant workers falling 20 percent across the globe because of the pandemic.

Labor Undersecretary Claro Arellano told a recent House Committee on Overseas Workers’ Affairs hearing that around 500,000 OFWs will be unemployed by August this year, joining the 5 to 10 million workers who could lose their jobs in the country, which Labor Secretary Silvestre Bello III earlier projected.

Ending the lockdown would not immediately help the economy bounce back, even considering that Metro Manila accounts for the largest share of the country’s GDP at 36 percent (followed by Calabarzon at 17 percent and Central Luzon with a share of 9.8 percent, regions that will also be shifted to GCQ).

The fear of a virus that has no vaccine will still be around and it will continue to have a significant effect on the economy.

People will still be reluctant to return to work and go shopping, affecting consumption. They will likely forego making big purchases and new investments, like buying a house, for instance, or starting a business.

Even businesses are likely to review their financial commitments and major investments while the economic outlook is uncertain. Already, we are seeing some companies looking to trim their work force to cut costs, particularly in the travel and hospitality sectors.

If travel restrictions are relaxed, the threat of catching the virus and the hassles of all the additional precautionary measures being imposed by authorities will likely discourage many people to travel, a big setback to the tourism industry, which contributes around 12 percent to the Philippine economy.

Even other sectors like the IT-BPM, manufacturing, trade and banking are not spared. For instance, the Bank of the Philippine Islands, one of the largest banks in the country, already announced that it is laying off about 30 percent of its probationary employees, or about 2 percent of BPI’s total work force.

The millions of workers who will be permanently laid off, including the jobless OFWs coming home, plus the new graduates who will join the ranks of the unemployed, will all reinforce downward spending, or reduce demand for goods and services across the whole economy.

But there is hope in this long and winding road to recovery, and it starts with resuming a range of economic activities that were crippled during the lockdown. The government has no choice but to arrest the economic free fall.

In the long term, the debt and deficit will be diminished by economic growth, productivity and low inflation, once industries and businesses are revived and people get their jobs back.

IF you took the time to look at your spam e-mail in the past few months, you might have noticed that “Non Contact Touch Free Thermometer is critical to your health.” One local online shopping group was selling a face mask for P5,200 per piece. It is now...
Read more
Opinion

Plasma is the liquid portion of our blood, comprising up to 55 percent. It is mostly water, containing vital substances like hormones and nutrients. It also carries antibodies, a type of protein synthesized by a person’s immune system to help the body fight off...
Read more
Opinion

Brothers and sisters, just last week, Presidential Spokesperson Harry Roque joyfully greeted the Philippines because it supposedly beat the forecast claimed by experts from the University of the Philippines regarding the expected number of Covid-19 cases by the end of June. In UP’s...
Read more
Opinion

AS the economy gradually opens up amid the pandemic, Filipinos keenly anticipate whether many of the “old normal” conditions will still hold true or whether new developments will prevail in the “new normal.” One of the challenges that would probably still be present...
Read more
Opinion

‘Our own Mt. Rushmore Memorial’

The US of A had a grand birthday celebration on the 4th of July, which placed Mt. Rushmore National Memorial very much in the news. Holding the 244th anniversary of America’s independence at the majestic mountain beneath the colossal monument of four of...
Read more
Opinion

This is the time for reckoning. It has been more than three months when I vacated that apartment. The history of the universe lies on top of the history of time; Marlon Brando stares at Laurence Olivier, both now rendered...
Read more
Opinion

Why Lito Atienza trends, and why ABS-CBN,  warts and all, is about keeping our choices

HOURS after that marathon 10-hour hearing on the ABS-CBN Franchise at the House of Representatives on Monday, Twitter was ablaze with comments—mostly weighing in favor of the beleaguered broadcast giant—about how lawmakers had wasted so much time over issues that had nothing to do with the usual...
Read more
Opinion