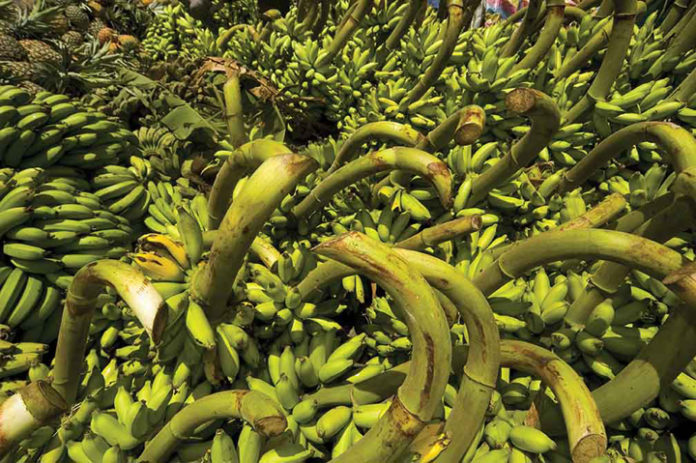 DAVAO CITY—Banana’s low-calorie and nutrient-dense popularity pushed the sales of the yellow fruit to other countries amid the virus pandemic, in contrast to the rest of its Top 10 peers in the orchards that all suffered a big fall in the global market.

Known for its compact array of nutrients, including fiber and antioxidants, the banana was among the in-demand fruits with a competitive and lucrative price tag.

The harsh reality, however, stares local banana players in the eye. Banana exporters in Mindanao failed to get a firm hold of what could have been a great banana bonanza.

“For one thing we do not really have that much bananas because of Panama disease, which continues to ravage our plantations. So even if the demand increased, we could only export so much,” Stephen A. Antig, executive director of the Pilipino Banana Growers and Exporters Association (PBGEA), told the BusinessMirror on Wednesday. The PBGEA is an association that groups the 33 major growers and exporters of banana, all doing their operations in Mindanao.

The freight-on-board (FOB) value of all fresh banana exports for the first quarter of the year, or at the time of pandemic, was $489,154,438. This value was an increase of 1.74 percent compared to the price level during the same period last year, according to the PBGEA, citing data released to the organization by the Philippine Statistics Authority (PSA). Ninety-five percent of this export of fresh banana is accounted by the Cavendish variety.

However, the volume had actually decreased based on the monitoring of shipment reports, the PBGEA said.

“The reason for the increase in value is due to high demand from foreign markets. Banana remains the most popular fruit during the pandemic because of its low price and nutritional value,” the PBGEA pointed out.

While the Department of Health said the fruit has no known curative effect against the coronavirus infection, its nutrients and vitamins are known to boost the human immune defense system, vital to combat any form of infection.

Medical literature on banana shows no fewer than 10 nutrients and vitamins can be obtained from one finger of banana alone, making it nutrient-dense.

Among them are potassium, which contains 9 percent of the recommended daily intake (RDI) for every 118 grams of a medium-sized banana, and also magnesium, with a higher 14 percent RDI. These two nutrients alone are vital to the heart’s health.

It is also rich in Vitamin B6 and Vitamin C, one of the highly recommended vitamins to keep coronavirus infection at bay before its onset. Other vitamins and nutrients include copper, manganese, net carbs, fiber and protein and fats.

While the popularity of banana propped up its price during the pandemic, the Philippines failed to draw the best advantage from the lost opportunity.

First, prices of banana in most markets were quite stable, except in China as expected, Antig said.  A year before the full-blown pandemic, in 2019, the Philippine Cavendish (fresh banana) exports was 4,086,853 metric tons valued at $1.83 billion.

Antig said that when the borders were closed by the 10-member economies of the Association of Southeast Asian Nations, or Asean, prices went up due to shortages of supplies.

In the case of China, a special trading partner of Asean, it reopened its borders “and prices are again erratic in China.”

However, Antig said, a big part of the failure to partake of the price opportunity was the production level that, he said, remained low.

Production areas remained fixed from the 83,843 hectares in 15 provinces, whose area has not expanded much since the data reckoning in 2016. Rather, the industry was seeing a creeping reduction of the area size due to the effect of the Panama disease, a contagion that resembles much of the dilemma on the coronavirus pandemic with no known cure yet but rapidly infecting their respective territories.

The Philippines is not alone on the boat to nowhere. Ecuador, the world’s leading banana exporter, as with many other South American exporting countries, was also tied down by the pandemic, and hobbled from capitalizing on the big demand amid the pandemic.

Like the Philippines, many banana-exporting countries were bogged down by manpower sharply reduced by the coronavirus pandemic, affecting the transport of the fruits.

“We have not stopped production and export. But we are encountering a lot of logistical problems for workers due to differing interpretations of quarantine measures,” Antig said.

Ecuador’s government continued to subsidize the banana industry, a technical disregard of the principle on fair trade laid down by the World Trade Organization, which discourages governments from subsidizing their industries in order to level the playing field.

Yet, their continued government support to the banana industry allowed Ecuador to be the main threat to the Philippines, holding on to its Asian markets.

Worse, China’s tack to operate huge banana plantations in some Asian countries has borne fruit, and these countries have begun to export to China.

“In the long run the real threats would be from our neighboring countries which can produce the same bananas but at a much lower cost,” Antig warned.

While China was expanding to become an exporter someday, Filipino growers said the Philippine government could have helped “by making lands available for expansion, or replacement of those affected by the Panama disease.”

However, he said, “government is making it difficult even to lease lands with ordinances fixing rentals.”

Also, as a counterweight to the turf war in Asia posed by the presence of Ecuador and other South American exporting countries, he said, “we really believe that research and development efforts would contribute a lot. Unfortunately we still have to see concrete actions from the government on this.” Sadly, R&D in the Philippines leaves much to be desired.

“For now, Ecuador is still number 1 and I believe we are number 2,” Antig said.