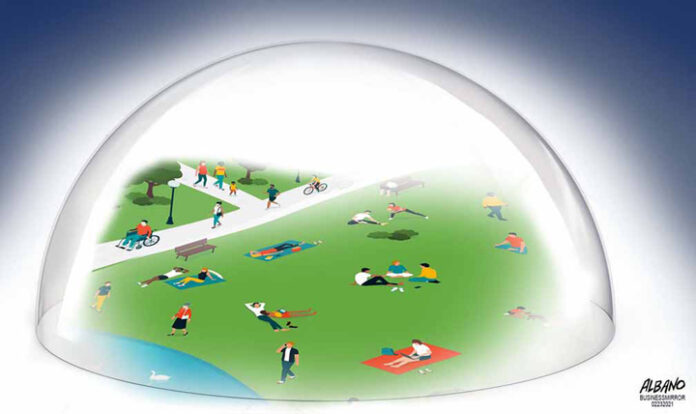 The city of Manila has been receiving some positive press recently with its green initiatives, the latest of which is the inauguration of a one-hectare public park, called the Hidden Garden.

The park is located at the heart of Lawton. A report from ANC says: “You can see the park from the Metropolitan Theater, the City Hall, or the Post Office, and adjacent to the Liwasang Bonifacio. It’s about 10-15 minutes walk from Binondo. The spot, which is now the city’s newest attraction, used to be a dumping ground of old vehicles and had served as home to street dwellers for many years.”

Manila Mayor Isko Moreno said the inauguration of the Hidden Garden is in line with his administration’s policy to open more green spaces in the nation’s capital.

Indeed, city hall workers have been busy rehabilitating and expanding parks, even putting plants and other greens under the LRT route along Taft Avenue and other areas.

The Hidden Garden is only one of many open-air green spaces around Manila, which include the Manila Baywalk, Luneta or Rizal Park, Arroceros Forest Park, Mehan Garden, The Kartilya ng Katipunan Park beside the Manila City Hall and the Paco Park.

The Covid-19 pandemic has certainly highlighted the need for parks and open spaces, as health and safety protocols require people to avoid crowded and enclosed places.

Parks, gardens and recreational spaces are essential infrastructure in our cities, but more so nowadays. Instead of more high-rise condominiums and buildings, concrete flyovers, and squatter colonies in what used to be open spaces, we need greener infrastructure—little oases in our cities that can cool hot and tired pedestrians and commuters and serve as safe havens from this confining Covid pandemic.

The few remaining public parks and open spaces must be funded and kept well. City governments should increase access to parks. They shouldn’t allow stores and other commercial structures to be built inside them. That’s not what parks are for.

LGUs can also convert vacant or underused land into pocket parks and green spaces that can help communities maintain physical and mental health.

They can also widen sidewalks and bike lanes and close certain streets to vehicles to make them exclusive to pedestrians.

According to scientific estimates, Metro Manila has about 13 percent green cover left. It is one of the lowest ranked cities in the Asian Green City Index, a measurement of the environmental performance of 22 urban cities across the region by the Economic Intelligence Unit.

Data from the Department of Environment and Natural Resources showed that only 12,152.79 hectares out of Metro Manila’s total land area of 55,922.22 hectares, or only 21 percent, were allotted to green spaces.

Co said even with safety measures against Covid, there is no guarantee that going to malls is safe for those allowed since they are enclosed areas and “it is very difficult to keep physical distancing in an enclosed area.”

He instead recommended going to parks where the public, especially the children, could enjoy the open space, which reduces the chances of contracting the virus.

With the further easing of quarantine measures, Metro Manila residents should be allowed to enjoy public parks and open spaces as long as they follow health and safety protocols.

Investing in green infrastructure and ecological projects like parks, gardens, waterfronts, riverwalks, baywalks, plazas and other recreational open spaces in our cities is essential not only to the country’s climate resilience but also our recovery from the pandemic.

We can turn the Covid crisis into an opportunity to reshape Metro Manila and other urban centers into the green havens they once were.

No country in Asia supposedly has more experience with democracy than the Philippines. Yet, more than a hundred years...
Read more

The city of Manila has been receiving some positive press recently with its green initiatives, the latest of which...
Read more

Be brave against China

A vigorous national defense cannot exist without strong, security alliances with other nations. It is nice to have the assurance...
Read more

The economic crisis created by the Covid-19 pandemic calls for urgent policy responses from the government to support households...
Read more

At a time when countries all over the world should be working together to contain a virus that originated...
Read more

Joyce Kilmer’s poem, Trees, goes: “I think that I shall never see /A poem lovely as a tree”... and...
Read more

No more Covid tests for visitors at Puerto Galera

Finding a way back

History repeats itself. This is particularly true in claims for refund. Taxpayers suffer from poor legislation where doubts are always tilted against them. The story of the value added tax-refund confusion started with the reversal of the Atlas Case (GR...
Opinion

Nike Inc. executive Ann Hebert abruptly left the company following a Bloomberg Businessweek report about her son operating a business reselling sneakers and using a credit card in her name. Hebert, who served as vice president and general manager of...
Companies