Five steps to a fresh start with Security Bank

Whenever a new year comes around, most look forward to it with a positive conviction and an opportunity for...
Read more

More and more people are shifting to small-space living, with condominiums being a popular choice among those who choose...
Read more

Vista Mall and Starmall, in partnership with the Department of Agriculture, unveil the first leg of the Farm to...
Read more

Filipinos in more than 8 million households who use liquefied petroleum gas or LPG stand to benefit from Senate...
Read more

Happening this February 27 from 7AM to 5PM at the 2nd floor of the Palma Hall of Unibersidad de...
Read more

Despite the travel and tourism industry being hit hard by the coronavirus pandemic, giving continues as Marriott Business Council...
Read more 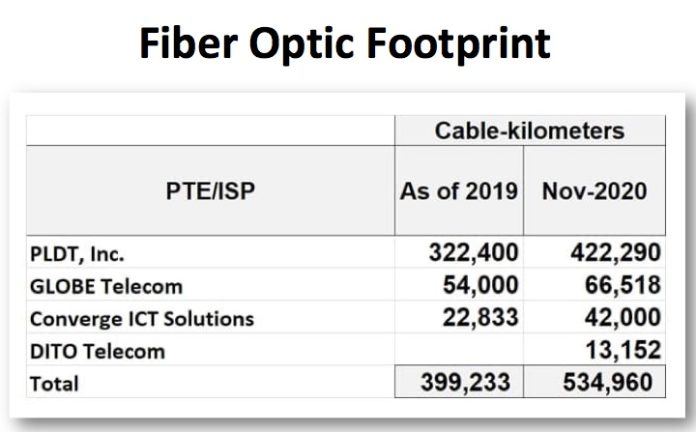 BELIEVING that fiber optic networks provide the fundamentals for telecommunication as they complement the shared base tower infrastructure, the National Telecommunications Commission has requested various government agencies to include fiber optics in the streamlining of the permitting process.

For fiber optics, the combined footprint of PLDT, Globe, Converge and DITO has reached 534,960 cable-kilometers by November 2020, an increase of 135,7727 from last year’s 399,233. As a result of this, fixed broadband internet speed increased by 262.70 percent as of November 2020, while mobile broadband likewise grew by 148.52 percent, compared to July 2016 tests by Ookla Speed Test Global Index.

“We noticed that there is fast roll-out of towers and fiber optic cables, that’s why there is an increase in internet speed,” he said. This is due to the sharp increase in the issuance of permits to telecommunications companies by local government units to build cell site towers and fiber optic networks following the order of President Rodrigo Duterte to streamline and speed up the process or they will face sanctions.

For the month of November alone, at least 1,054 construction permits have been issued, bringing the total number of permits approved to 4,644 since July 2020, or an average of 929 permits per month. Permits issued to Globe surged to 590 percent during the period, while Smart rose to 150 percent. The combined number of towers built by DITO, Globe and Smart over a five-month period ending in November totaled 2,510, or an average of 502 towers per month.

Overall, the country has 22,405 cell towers as of end-November. Cordoba said he expects the internet service to further improve along with the rates for the consumers, as the competition among industry players become more intense once DITO starts its commercial operations, combined with the entry of RED Broadband and the aggressive positioning of Converge.

Five steps to a fresh start with Security Bank

Whenever a new year comes around, most look forward to it with a positive conviction and an opportunity for a fresh start. But 2020 had different plans for the world. Events and vacations were cancelled, routines and roles shifted,...
BMPlus

‘No restrictions’ on bikinis in Doha

Despite the travel and tourism industry being hit hard by the coronavirus pandemic, giving continues as Marriott Business Council Philippines reportedly donates more than P1M and has rendered 17,096 volunteer hours last year to Save the Children and numerous partner organizations and communities. Recently,...
Banking & Finance