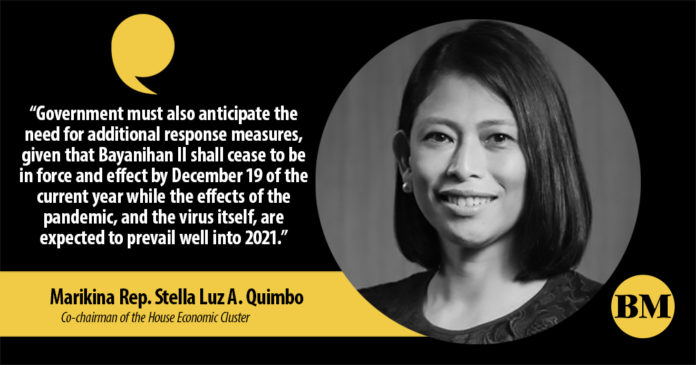 The minority leader of the House of Representatives on Thursday urged Malacañang to censure Presidential spokesman Harry Roque for “uttering...
Read more

Cha-cha in a pandemic stirs debates

IS there a need to change the Constitution amid the Covid-19 pandemic? This was the repeated question during the...
Read more

THE House Committee on Constitutional Amendments will resume on Wednesday (today) its hearing on the proposal amending the economic...
Read more

To secure support from the Senate, the chairman of the House Committee on Constitutional Amendments assured senators that “slight”amendments...
Read more

The co-chairman of the House Economic Cluster on Tuesday filed a bill providing for a P400-billion Bayanihan to Arise as One Act, while mandating the National Economic and Development Authority (Neda) to craft a plan to improve the country’s long-term economic and disaster resilience.

In House Bill 8031, Marikina Rep. Stella Luz A. Quimbo said she filed the Bayanihan 3 Act to give additional funding and strengthen government efforts and response to the ongoing public health crisis complicated by three successive typhoons that battered most parts of Luzon.

According to Quimbo, the P400 billion in spending package seeks to ensure help is available under the state’s social amelioration program, rehabilitate areas damaged by natural calamities, sustain delivery of basic goods and services, implement high-impact infrastructure projects, assist businesses to keep them afloat, and bring the economy on the right track.

Quimbo said the proposal will also put to task the Neda to craft a long-term plan, which shall be resilient from future shocks such as pandemics and typhoons. It also mandates the agency to review the Flood Management Master Plan for Metro Manila and surrounding areas to improve disaster risk reduction and resilience.

She said the money allotted to fight Covid-19 under the 2021 spending plan is minuscule, representing only P248 billion out of the total P838.4 billion earmarked for the pandemic response that also included some P590 billion for infrastructure under the government’s centerpiece program, the Build, Build, Build program.

But for the country to fully rise from the Covid crisis, Quimbo said the Bayanihan 3 ensures adequate funding for vaccine procurement and steady stream of  aid, or ayuda to low-income families.

The lawmaker also recognizes that assistance to businesses are crucial to job preservation, thus worker subsidies are provided in the bill, which shall cover pay for testing and sick leaves, among others, capacity-building programs for critically impacted businesses to assist them in adapting to the new normal.

The proposed Bayanihan 3 seeks to extend the effectivity of the Bayanihan to Recover as One Act (Bayanihan II) as its provisions remain to be critical for recovery beyond December 2020.

“Government must also anticipate the need for additional response measures, given that Bayanihan II shall cease to be in force and effect by December 19 of the current year while the effects of the pandemic, and the virus itself, are expected to prevail well into 2021,” she added.

Cortex Enterprise Solutions was built to empower Filipino businesses to be on par with the digital transformation of enterprises...
Read more
- Advertisement -
Nation

THE Bureau of Immigration (BI) has been asked to deport a famous Taiwanese vlogger and social-media influencer for selling cosmetic...
Read more
- Advertisement -

AFTER a thorough review of their application, the Food and Drug Administration (FDA) has granted Emergency Use Authorization (EUA) to Pfizer-BioNTech Covid-19 vaccine as its interim data from the ongoing Phase 3 trial showed that the vaccine has an efficacy of “95 percent” in the study population and at least “92 percent” among all racial...
Read more

THE Bureau of Immigration (BI) has been asked to deport a famous Taiwanese vlogger and social-media influencer for selling cosmetic products that are unregistered with and deemed hazardous by the Philippine Food and Drug Administration (FDA). The deportation of vlogger Yun-I-Wong, popularly known as Winnie Wong and Penelope Pop, was sought by the Action for Consumerism and...
Read more

THE Judicial and Bar Council has announced that the application and nomination for the next Chief Justice is now open after Chief Justice Diosdado Peralta’s application for early retirement was granted by the Court. Peralta last year informed his fellow magistrates of his decision to cut short his term which was supposed to end when...
Read more

The minority leader of the House of Representatives on Thursday urged Malacañang to censure Presidential spokesman Harry Roque for “uttering insensitive and arrogant” statements. “We are in the midst of a pandemic and the least that we can expect from our government’s statement to the sentiments of the people is compassion,” said House Minority Leader Joseph...
Read more
- Advertisement -
- Advertisement -