Diwata-2 proves Filipinos are capable of owning and developing satellites 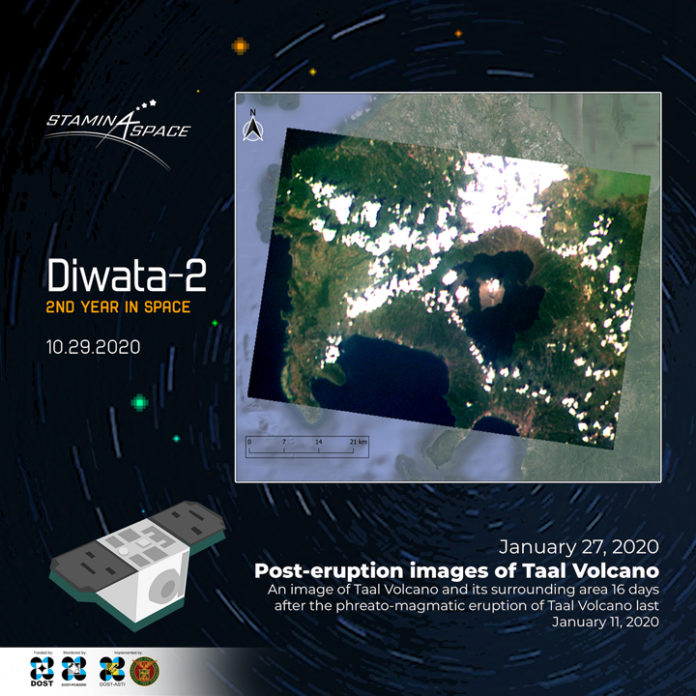 The Filipino-made microsatellite Diwata-2 marked its second year in orbit on October 29.

In its two-year journey, Diwata-2 allowed the Filipinos to take a peek through a typhoon, provided clues on the extent of Taal volcano’s ashfall, and even took us on a quick sight-seeing trip to the moon.

Diwata-2 has already acquired 19,439 images of the Philippines, spanning 82.01 percent of the country, Stamina4Space Program said in a news release.

Globally, the microsatellite has captured 32,256 images. These images are part of the data being collected to conduct scientific measurements and experiments for environmental assessment and monitoring.

“Diwata-2 has already covered twice as much half the time than its predecessor, Diwata-1. This is mainly due to its sun-synchronous orbit, allowing more frequent revisits and improvements made in pointing accuracy and mission operations from the ground,” said Dr. Gay Jane Perez, Space Technology and Applications Mastery, Innovation and Advancement (Stamina4Space) program leader.

To mark this important milestone, the Stamina4Space Program has organized a virtual tour highlighting Diwata-2’s features and latest developments. Nearly 50 space enthusiasts have joined the sessions while over 200 have expressed their interest in the event.

The pandemic did not stop the researchers from conducting experiments to further enhance the capabilities of Diwata-2.

In fact, researchers working on Diwata-2 were able to optimize image download from the satellite to the Ground Receiving Stations, marking the start of a faster turnover rate of images from acquisition to processing.

They were also able to improve the target pointing capabilities of the microsatellite after a successful experiment using the moon as a reference point.

Like how Diwata-2 built upon the learnings from Diwata-1, Diwata-2 is paving the way for the development of a more robust microsatellite, a testament to the continuous advancement of space research and development in the country, the new release said.

“Moving forward, we also see Diwata to continuously serve as a seedbed to nurture growth in space science and engineering in our country through research and capacity building in satellite technologies and relevant space systems for the benefit of the society,” Perez said.

Diwata-2 has proven that Filipinos are capable not only of owning and operating satellites, but owning and developing them.

“The Philippine Space Agency welcomes the challenge and opportunity to institutionalize and operationalize the various space science technology applications initiatives towards sustained productivity and socioeconomic benefit for the country,” Marciano added.

Diwata-2 flies at an altitude of 605 km above sea level at the speed of 7.5 km per second in a sun-synchronous orbit. It is expected to serve the country for another three years.

THE hardship the players went through in this challenging time of the pandemic are more than enough motivation for...
Read more

Notwithstanding delays in the delivery of its negotiated procured vaccines, the government is sticking to its target of completing...
Read more

THE year 2020 has been an arduous year for all of us. Around the globe we experienced community quarantines...
Read more

Central Bank Governor Benjamin E. Diokno underscored that digitalization has kept the gears of the economy running amid the...
Read more

MEMBERS of a team seeing action in the inaugural Pilipinas VisMin Super Cup and officials of a newly-founded sports...
Read more

Previous articleAteneo, Pisay sign pact to train over 500 teachers on ADL
Next articleInnovation Olympics 2.0 for agriculture deadline of application on Nov. 17
Jump to text-only home page

"Teenage pregnancy is unplanned, but not necessarily unwanted, and unplanned pregnancy means no regrets.” These are some of the findings presented by Dr. Gloria Luz M. Nelson, professor of Sociology at the University of the Philippines Los Baños, based on...
Science

The Covid-19 pandemic, which necessitated various levels of community quarantines and lockdowns, forced many people to shy away from consulting their doctors or going to hospitals for fear of contracting the Covid-19 virus. This led to the disruption in the...
Health & Fitness