A competition of ‘madnesses’ 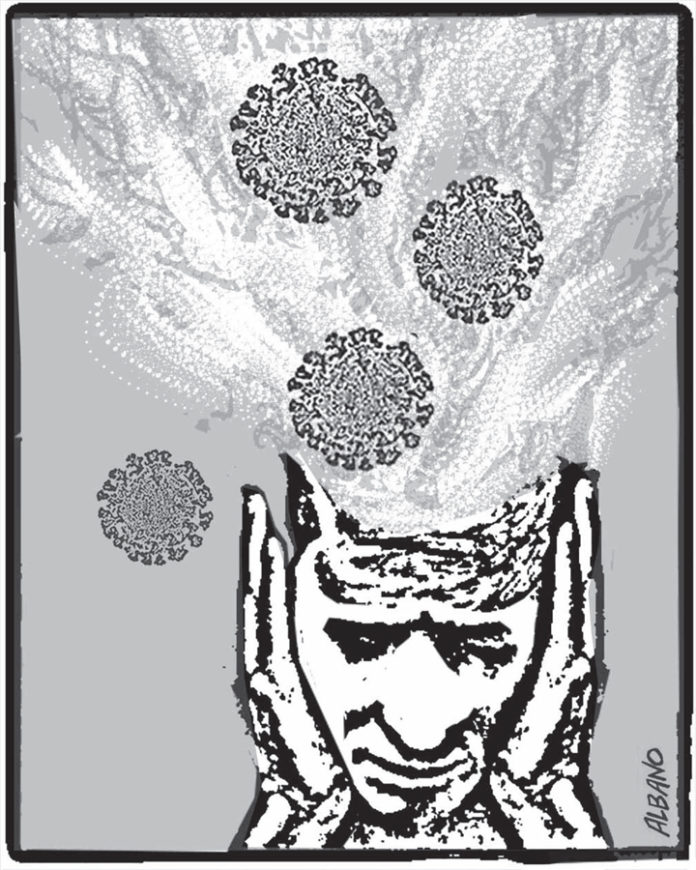 “Why do you call it the Age of Madness?” Fareed Zakaria in his CNN program called “GPS” is asking Bernard-Henri Lévy, one of the most prominent French intellectuals at present. Lévy has a new book titled The Virus in the Age of Madness.

Bernard-Henri Lévy, who is also a philosopher and filmmaker, repeats the question in what could be his answer—“because we are living in the age of Madness.” He explains it quickly by pointing to the madman that is Trump. In a language that is familiar to those who read philosophical musings, the thinker points to how the US president refuses to wear a mask even as he puts a mask to cover reality, the reality of the pandemic. That is one end of the extreme. The other end, Lévy stresses, involves those who “over-react,” those who would renounce their civil rights and civil liberties in exchange for a guarantee of safety. This tendency Lévy says is “also mad.”

The session asks the prime question: “What has Covid-19 done to humanity? Lévy admits one of the effects of the virus is the widespread selfishness of humanity. Those who do not want to wear mask are not seeing the deaths around them. They do not care. On the other hand, there are many who take advantage of the panic brought about the virus. On this side of the globe, it has been written how there are governments using the pandemic to oppress people.

Lévy says we are surrounded by “a competition of madnesses.”

The French public intellectual has articulated it well by way of an international platform but if he had only travelled southeast to where the Philippines is, he would have generated more insights about “madnesses.”

The daily occurrences in this country ever since the lockdown only make sense if we accept one thing: we are surrounded by different forms of madness. The lucid intervals, if there are any, are in people despairing for solutions.

The Department of Health constructs statistical tests out of numbers that do not add up. What would philosophers say about incidence of cases where the reports eschew any respectable notion of making a mistake by classifying some numbers as “delayed” and others as “fresh?” This is pandemic and not a report on arrivals and departures and fruit supply.

On April 28, 2020, Bernard-Henri Lévy wrote a short essay, After the Coronavirus, Who Do We Want to Be?

It is a lovely essay demonstrating how keenly a philosopher can make use of historical data: The time was 412 BCE; the place, Perinthus, in Thrace; the moment when the Greek language invented, if not the thing itself, then at least its name (epi demos, literally “on the people,” the first calamity that, in contrast to the biblical idea of a “scourge” afflicting the “firstborn,” falls on an entire people without distinction as to age, status, or moral purity).

If economics creates social classes and inequality, the virus cuts across classes and affords us the truest form of equality on earth. To the Secretary of Education, Leonor Briones, is ascribed these words of wisdom: we will all die. See, even educators have easy access to madness.

Is this assuring—this fact of the virus not recognizing religion? During the close of the 19th century and the beginning of the 20th, it was a tradition to paint or draw the “cross” on house posts, beams, and doors. This was done with the strong belief that the Cross, the Sign of the Cross, would halt a cholera, a plague, or any other pestilence. Not anymore, the word “epidemic” signals the secularization of the disease, if we are to follow this French intellectual. No cross can drive away the virus. Covid-19—Covid-14 for other madwomen—is particularly virulent in that even the ultimate site of the Cross, the Holy Sacrifice of the Mass, has been stopped by it.

And yet, Bernard-Henri Lévy tells us nothing has changed really in how societies defend themselves against a new virus. He cites Hippocrates in his account of the “Cough of Perinthus,” which has a list of preventive measures similar to what our epidemiologists might recommend. He instructs us to go back to Boccaccio’s The Decameron, where the great chronicler explains that to deal with “mortal pestilence” is to “shut oneself up” in isolation; to stop “visiting family members”; to ensure that “citizens avoid each other and themselves.”

If civilizations have been destroyed by plagues, are we creating a new civilization? Is there a method in this madness?

Lévy calls any hope for recovery an illusion of a post-virus world that is back to normal. He stresses how “Philosophers of medicine have refuted this trope of seeing a disease as an attack that tests a healthy body and then, once the attack is fought off, restores it to its former integrity.”

Lévy refers to Georges Canguilhem, another French thinker who, years back showed us “that a body, be it biological or social, always comes out damaged, marked, and transformed by the passage of a new virus.”

Unfortunately for us, the philosophical thinking with its armory of detachment and intellect can come across as uncaring. And that, even if the Philosopher disagrees, is madness. As with the latest tip on how to clean our facemask with gasoline. As with another madman’s earlier discovery of disinfectant as the ultimate cure when ingested.

Postscript. As a filmmaker, Bernard-Henri Lévy did in 2016 a documentary film on the search for aspects of true Islam. This was Peshmerga, which was chosen by Cannes as a special screening to its official selection. Back in 1997, he directed a romance film, Day and Night, which was considered by some critics as the worst film of that year, along with Batman and Robin. Don’t you think that was madness, too?

Why is the world not cheering on Russia?

More than 200 Covid-19 vaccines are being developed worldwide and a good number of them are already in phase III trials. Knowing the processes involved, researchers said it will take several months for those vaccines to be approved. On Tuesday, Russia became the first country to officially register...
Read more
Opinion

Last Tuesday, at around noon, I saw a question pop up on the group chat of the Comelec beat reporters, asking me if it was true that former Chairman Sixto Brillantes had passed away. Within minutes after that first query, I was inundated...
Read more
Opinion

In a previous column, we reported the study of United Nations Conference on Trade and Development (Unctad), the international agency monitoring the flow of foreign direct investment across the globe, on the FDC flows this year. Their World Investment Report 2020 (June 2020)...
Read more
Opinion

The trinity of fools

Mark Twain did not say it so I will. “There are three kinds of fools: fools, damned fools, and fools with statistics.” Being a fool is not shameful by any measure. We are all fools now and then. Being a...
Read more
Opinion

Sputnik V vaccine: Is it really the answer?

For an administration that has placed all its marbles on the development of Covid-19 vaccine, the announcement of Russian President Vladimir Putin that his country has done so must be music to President Duterte’s ears. Despite imposing the world’s strictest...
Read more
Opinion

The great faith of a gentile

After the little faith demonstrated by Peter in a stormy sea, Jesus was amazed to encounter a gentile woman, a stranger, with an irresistible faith in Him (Matthew 13:21-28). A gentile woman While in the region of...
Read more
Opinion

T he Covid-19 pandemic has exposed our vulnerability as a food-importing country. It also reminded us about the importance of the agriculture sector not only to ensure sufficient food supply for the country, but also to help keep our citizens healthy amid our fight against...
Read more
- Advertisement -

Anna Aquino to release new single about moving on

Hugot Princess Anna Aquino is back with a new single scheduled for...
Read more
Top News