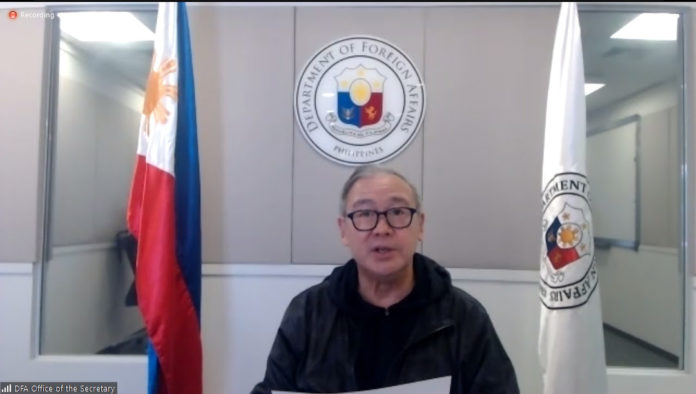 FOREIGN Affairs Secretary Teodoro L. Locsin Jr. on Thursday led the unveiling of a Philippine Green Lane, described as a pioneering effort for providing timely humanitarian relief not only for Philippine seafarers but for all sailors of the world.

“And special thanks to all those who did the actual provision after detailed provision of this superb process,” Locsin added, during the signing ceremony of the Interagency Joint Circular on Green Lanes. He was joined by Labor Secretary Silvestre Bello III, Transportation Secretary Arthur Tugade, DILG Undersecretary Bernardo Florece, DOJ Assistant Secretary Nicholas Felix Ty, and DOH-Bureau of Quarantine representative Dr. Edgar Maala.

The Philippine Green Lanes facilitate the speedy and safe travel of seafarers, including their safe, swift disembarkation and crew change during the Covid-19 pandemic, according to Locsin.

He added that “with this guidelines we are answering the call of the International Maritime Organization [IMO], and the maritime industry, to put in place a framework for ensuring safe ship crew changes and travel during the Covid-19 pandemic and we are doing more.”

Locsin said the country agrees with the IMO “that the current situation is unsustainable for the safety and well-being of the ship crew and the safe operation of maritime trade, and we need to address the situation of the world’s seafarers.”

He noted that without the mariners, “there would be no shipping,” and people to “ensure the maintenance of global supply chains.”

According to Locsin, the Philippines is “a maritime nation, the most important country of origin in the world for all shipping crews of all ranks, and our Filipino sailors play a key role in merchant shipping worldwide.” He said the economic impact of the Philippine maritime industry, comprising, among others, the crewing and manning industry and the training of seafarers, is huge and hard to measure.

“Remittances of seafarers alone contribute billions of dollars to the national economy,” Locsin said, adding that the European Union has a marked “preference for Filipino mariners and pays them top euro.”

A seaman’s entry-level salary ranges from P10,000 to P12,000 per month, sometimes up to P17,000 per month for the highly experienced. Seamen abroad have a starting monthly salary of $900.

From January to April, Filipino seafarers sent home $2.14 billion, up 10.7 percent from $1.93 billion in the same four-month period in 2018, according to the party-list group ACTS-OFW.

The country’s top envoy added, “that is why the European Union (EU) has bent over backwards again and again in assessing the adequacy of our marine schools.”

The EU has sent representatives to the Philippines to make sure that its mariners who graduated from a host of marine schools meet international standards, he said.

Filipinos employed as seamen worldwide exceed any other nationality, according to records.

Locsin said, “We are aware that the Covid-19 pandemic and the resulting restrictions worldwide have caused thousands of seafarers to be stranded at sea and they have to extend their service onboard ships, after many months at sea, enabled to be replaced after long hours of duty.”

Locsin thanked those who facilitated the Philippine Lane “to facilitate the speedy and safe travel of seafarers, including their safe, swift disembarkation and crew change during the Covid-9 pandemic.”

He singled out Transportation Secretary Arthur Tugade, “for your patience with my request in returning overseas Filipino workers in staggering numbers.”

“And special thanks for making allowance for the arrival and departure of nuns,” he said, saying Tugade could be a mother superior in his past life.

“But I have a soft spot for nuns and as general [Task force implementer Carlito] Galvez said, ‘we are getting points in heaven, the only reward we should expect for all we do.’”

He thanked the DFA partners and the interagency task force for their fantastic and speedy collaboration.

AMID the surge in new novel coronavirus disease (Covid-19) cases in Metro Manila, Malacañang announced half of the public school classrooms in the region will be used as temporary quarantine facilities. In a statement, presidential spokesperson Harry Roque said the arrangement was already agreed upon...
Read more
Top News

Members of the Inter-Agency Task Force for the management of emerging infectious diseases (IATF) were designated as point persons to boost government measures against the novel coronavirus disease (Covid-19) in areas placed under modified enhanced community quarantine (MECQ).  In its resolution No. 62, which was...
Read more
Top News

REVENUES of the Philippine tourism industry fell by P190 billion from March to July this year, owing to the international travel restrictions implemented by various countries to contain the Covid-19 outbreak. This was revealed in a forum hosted by the Philippine Tour Operators Association (Philtoa)...
Read more
Top News

FIRST Metro Investment Corp. (FMIC) is expecting the Bangko Sentral ng Pilipinas (BSP) to have another reduction in key policy rates and reserve requirement before the year ends. The investment bank of Metrobank Group noted that while the Central Bank has already cut the policy...
Read more
Top News

EXCISE-tax collections from “sin” products for the first half of the year dropped by 25.3 percent to P109 billion as it took a hit from the government’s imposition of lockdowns that paralyzed the economy. Latest preliminary data obtained by the BusinessMirror showed the total “sin”...
Read more
Top News

DESPITE the damage caused by the pandemic on lives and livelihoods, the Philippine economy has retained its long-term prospects, according to an economist from the University of Asia and the Pacific (UA&P). In an online briefing, UA&P economist Bernardo Villegas said the Philippines will still...
Read more
Top News

THE Philippine Association of Meat  Processors Inc. (Pampi) has filed a petition at the Tariff Commission (TC) to maintain the tariff slapped on imported mechanically deboned meat of (MDM) chicken and turkey at 5 percent. The TC on August 11 issued a notice of conduct...
Read more
- Advertisement -