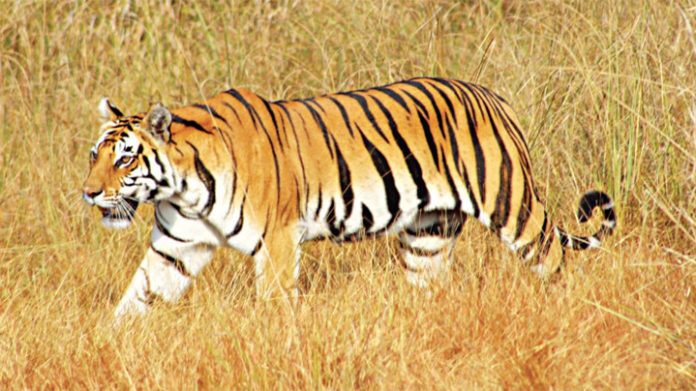 Tigers are one of the world’s most iconic wild species, but today they are  endangered throughout Asia. They once roamed across much of this region, but widespread habitat loss, prey depletion and poaching have reduced their numbers to only about  4,000 individuals.

They live in small pockets of habitat across South and Southeast Asia, as well as the Russian Far East—an area spanning 13 countries and 450,000 square miles (1,160,000 square kilometers).

Today Asia is experiencing a road-building boom. To maintain economic growth, development experts estimate that the region will need to invest about  $8.4 trillion  in transportation infrastructure between 2016 and 2030.

Major investment projects, such as China’s  Belt and Road Initiative—one of the largest infrastructure projects of all time—are fueling this growth.

While roads can  reduce poverty, especially in rural areas, many of Asia’s new roads also are likely to traverse regions that are home to diverse plants and animals.

To protect tigers from this surge of road building,  conservation scientists like me  need to know where the greatest risks are. That information, in turn, can improve road planning in the future.

We forecast that nearly 15,000 miles (24,000 kilometers) of new roads will be built in tiger habitats by 2050, and call for bold new planning strategies that prioritize biodiversity conservation and sustainable road development across large landscapes.

Road construction  worsens existing threats to tigers, such as poaching and development, by paving the way for human intrusion into the heart of the tiger’s range.

For example, in the Russian Far East, roads have led to  higher tiger mortality  due to increased collisions with vehicles and more encounters with poachers.

To assess this threat across Asia, we focused on areas called Tiger Conservation Landscapes—76 zones, scattered across the tiger’s range, which conservationists see as crucial for the species’ recovery.

For each zone we calculated road density, distance to the nearest road and relative mean species abundance, which estimates the numbers of mammals in areas near roads compared to areas far from roads.

Mean species abundance  is our best proxy for estimating how roads affect numbers of mammals, like tigers and their prey, across broad scales.

We also used  future projections of road building  in each country to forecast the length of new roads that might be built in tiger habitats by 2050.

We estimated that more than 83,300 miles (134,000 kilometers) of roads already exist within tiger habitats. This is likely an underestimate, since many logging or local roads are missing from the global data set that we used.

For tiger populations to grow, they will need to use the forests outside protected areas. However, the high density of roads in those forests will jeopardize tiger recovery.

Protected areas and priority conservation sites—areas with large populations of tigers—are not immune either. For example, in India—home to  over 70 percent of the world’s tigers—we estimate that a protected area of  500 square miles, or 1,300 square kilometers, contains about 200 miles (320 kilometers) of road.

Road networks are expansive. Over 40 percent of areas where tiger breeding has recently been detected—crucial to tiger population growth—is within just 3 miles (5 kilometers) of a nearby road. This is problematic because  mammals often are less abundant  this close to roads.

In fact, we estimate that current road networks within tiger habitats may be reducing local populations of tigers and their prey by about 20 percent. That’s a major decrease for a species on the brink of extinction. And the threats from roads are likely to become more severe.

Our findings underscore the need for planning development in ways that interfere as minimally as possible with tiger habitat.

Multilateral development banks and massive ventures like the Belt and Road Initiative can be important partners in this endeavor.

For example, they could help establish an international network of protected areas and habitat corridors to safeguard tigers and many other wild species from road impacts.

National laws can also do more to promote  tiger-friendly infrastructure planning. This includes keeping road development away from priority tiger populations and other “no go” zones, such as tiger reserves or habitat corridors.

Zoning can be used around infrastructure to prevent settlement growth and forest loss.

Environmental impact assessments for road projects can do a better job of assessing how new roads might exacerbate hunting and poaching pressure on tigers and their prey.

Are we ready for the next pandemic?

As scientists continue to find a cure for the dreaded coronavirus disease that has affected more than 10 million people worldwide, the lingering question is: Are we ready for another zoonotic disease that may cause another pandemic? A new report by World Wildlife Fund for...
Read more
Biodiversity

The onslaught of the Covid-19 pandemic showed the systemic weaknesses of the country in handling its biggest crisis since World War II. Moreover, the health crisis has emphasized the urgent need to pursue a green agenda in the new normal so the people can experience a better quality...
Read more
Biodiversity

After two decades of mining, Canatuan mined area coming back to life

After more than 25 years of mining, the diverse flora and fauna in Sitio Canatuan is finally starting to return. Once the site of one of the country’s large-scale open-pit mines, the area is now teeming with rich vegetation—tall trees and shrubs—surrounding a large body...
Read more
Biodiversity

The Department of Environment and Natural Resources-Biodiversity Management Bureau (DENR-BMB) has launched last week the maiden issue of Biodiversity Sentinel, the newsletter of the agency’s biodiversity bureau. The launching of the newsletter aims to further promote the country’s rich biodiversity, and communicate the policies and...
Read more
Biodiversity

Flight of the Philippine cockatoo

With a once-thriving population over the Philippine archipelago, the population of the red-vented cockatoo has drastically decreased in the 1990s due to persistent poaching and the massive destruction of their habitats. With slightly over 1,200 cockatoo individuals left in the wild, they remain on top...
Read more
Biodiversity

More businesses are undertaking efforts that support biodiversity conservation as part of their corporate social responsibility (CSR) activities, but are these enough? In her presentation in a webinar hosted by cement maker Holcim Philippines Inc. on June 15, Asean Centre for Biodiversity Executive Director Theresa...
Read more
Biodiversity

Where do infectious diseases emerge?

Zoonosis is the transmission of disease from animals to humans. It follows a simple equation: wildlife interaction plus increasing demand plus habitat conversion is equal to zoonotic diseases.
Read more
- Advertisement -