US restriction on chipmakers deals critical blow to Huawei 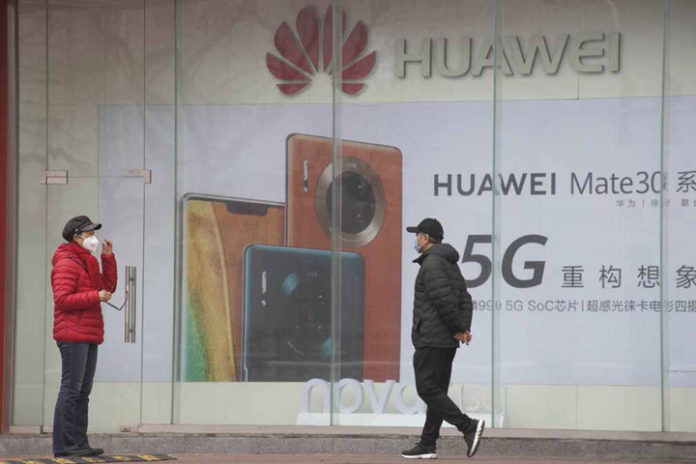 By Zen Soo and Joe McDonald / The Associated Press

HONG KONG—The latest US sanctions on tech giant Huawei threaten to devastate the company and escalate a feud with China that could disrupt technology industries worldwide.

Huawei Technologies Ltd. is one of the biggest makers of smartphones and network equipment, but that $123 billion-a-year business is in jeopardy after Washington announced further restrictions on use of American technology by foreign companies that make its processor chips.

Huawei spent the past year scrambling to preserve its business after an earlier round of US restrictions imposed last May cut off access to American components and software.

“Our business will inevitably be impacted,” Huawei’s chairman, Guo Ping, said at a conference on Monday with industry analysts.

“In spite of that, the challenges over the past year have helped us develop a thicker skin, and we are confident about finding solutions soon,” Guo said.

The company said on Monday that it would need some time to “understand the impact” of the latest restrictions. The conflict is politically explosive because Huawei is more than just China’s most successful private company. It is a national champion among industries the ruling Communist Party is promoting in hopes of transforming China into a global competitor in profitable technologies.

On Monday, China’s Ministry of Commerce warned it will protect “the legitimate rights and interests of Chinese enterprises,” but gave no details of potential retaliation. Beijing has threatened in the past to issue an “unreliable entities list” that might restrict operations of American companies in China.

Friction over Huawei adds to a broader deterioration of US-Chinese relations.

The two sides have declared a truce in a trade war, but arguments over the origin of the coronavirus pandemic that is roiling the global economy have raised worries that agreement might fall apart.

Huawei is at the center of the US-Chinese conflict over Beijing’s technology ambitions, which Washington worries might erode American industrial leadership.

Huawei has few alternatives if Washington refuses to allow its suppliers to use US technology. The company has developed some of its own chips but even the biggest non-US manufacturers such as Taiwanese giant TSMC need American components or production equipment.

“Every electronics system that Huawei produces could be negatively impacted,” Jim Handy, semiconductor analyst for Objective Analysis, said in an email. “Most China-based alternatives haven’t yet been established.”

New curbs announced Friday are the third round of sanctions aimed at cutting off Huawei’s access to US technology and markets.

In a statement, Huawei criticized the US decision as “arbitrary and pernicious” and warned it will affect operation and maintenance of networks installed by the company in more than 170 countries.

“The US government has intentionally turned its back on the interests of Huawei’s customers and consumers,” it said. The statement said the decision “will damage the trust and collaboration within the global semiconductor industry,” harming other industries that depend on it.

The Trump administration says Huawei is a security risk, which the company denies, and is trying to persuade European and other allies to shun its technology for next-generation telecom networks.

The potential impact extends far beyond Huawei. The company spends tens of billions of dollars a year on components and technology from US and other suppliers, purchases that might be disrupted if output of smartphones and other products is blocked.

US suppliers already have complained to Washington that restrictions imposed last May on Huawei’s access to American components and other technology will cost them billions of dollars in lost potential sales. The company’s telecoms market in the US evaporated after a congressional panel in 2012 labeled Huawei and its Chinese competitor ZTE Corp. security risks and told phone carriers to avoid them.

Last year’s sanctions require US companies to obtain government permission to sell chips and other technology to Huawei. The company can keep using Google’s Android operating system on its smartphones but lost the ability to preinstall music, maps and other Google services customers expect on phones. Huawei has launched its own smartphone operating system and is paying developers to create apps to run on it. But the company says sales have suffered. Despite that, Huawei reported a 2019 profit of 62.7 billion yuan ($8.8 billion) and said total sales rose 19 percent over a year earlier.

The sanctions highlight Huawei’s reliance on technology suppliers despite having one of the world’s biggest corporate research and development budgets.

Huawei has its own semiconductor unit, HiSilicon, but needs manufacturers including TSMC to make the most advanced chips.

Beijing has spent the past two decades and billions of dollars to create a Chinese semiconductor industry. But its biggest producer, SMIC, can only make chips that are two generations behind TSMC.

Then-chairman Eric Xu warned in March that more US pressure on Huawei might provoke Chinese retaliation that could disrupt its global industry.

Beijing will not “just stand by and watch Huawei be slaughtered,” Xu said. “The impact on the global industry would be astonishing.”

Working from home can have its benefits—not having to wear a uniform or rushing to the office, enjoying more than the usual number of coffee breaks or snacks, or having extra time with the family. Temporarily working from home or setting up a home-office will...
Read more
Digital Life

Google Philippines invites Filipino educators to join this year’s Virtual Innovator Academy (VIA20), a global community of passionate educators who advocates for and uses technology to solve big challenges around education.  VIA20 is the first virtual version of the Google Educator Groups (GEG) Innovator Academy....
Read more
Digital Life

By Naomi Nix & Ben Brody / Bloomberg News THE chief executive officers of Facebook Inc., Alphabet Inc., Amazon.com Inc. and Apple Inc. have agreed to testify before a congressional panel investigating competition issues in the technology industry, according to a spokesman for the US House...
Read more
Digital Life

CliQQ it at your favorite convenience store

IF there is one thing I have missed from our old lives, it’s going to a convenience store and choosing a meal for lunch or choosing chips for an afternoon snack. I also miss going to a 7-Eleven to buy soda or a...
Read more
Digital Life

By Barbara Ortutay & Tali Arbel / The Associated Press FOR years, social media platforms have fueled political polarization and hosted an explosion of hate speech. Now, with four months until the US presidential election and the country’s divisions reaching a boiling point, these companies...
Read more
Digital Life

The myths and benefits of wireless charging

EVER since Apple announced the wireless charging capabilities of the iPhone X and iPhone 8/8Plus in 2017, it’s become a much-talked about (and almost expected) feature especially for all flagship smartphones. But Apple wasn’t actually the first to implement wireless...
Read more
Digital Life

THE PLDT is playing a major role in helping the national government confront the challenges posed by the Covid-19 pandemic. PLDT-Smart recently announced it is providing free access for all Smart, TNT and SUN subscribers to the “ReliefAgad” app (www.reliefagad.ph) of the Department of Social Welfare and...
Read more
Digital Life

In the new normal, many still continue to work from home, while students will transition to online learning in the coming school year. Globe at Home is ready to meet the increasing demand for fast and reliable internet with the new Xtreme WiFi Plan 999, the most affordable...
Read more
Digital Life

Whether it’s through running a low-cost “embarrassment warm-up” or exploring the more complex idea of asset sharing, you have to make “adaptability” a part of daily life to survive and thrive in a risky, interconnected world in constant flux. This is not a one-off project, like building a house. It’s much more like a child in a state of continuous growth. And in my book, childlike openness, growth and renewal are exactly what we need right now.
Read more