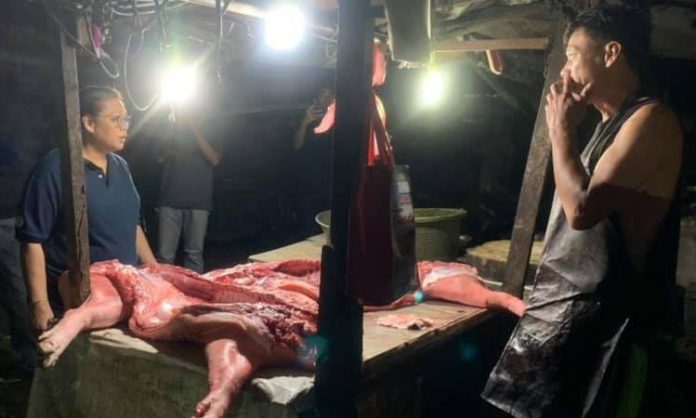 THE Department of Agriculture (DA) on Wednesday said it is considering changes in its protocol for controlling the spread of African swine fever (ASF) to ease the pressure on local pork supply and reduce the losses incurred by hog raisers.

In a speech on Wednesday, Agriculture Secretary William D. Dar said the agency will review its existing “1-7-10” protocol implemented by the government, particularly the 1-kilometer depopulation, or culling radius.

Dar disclosed that the DA is now looking at limiting the depopulation area to a 500-meter radius of the infected farm. He said this will ensure pork supply, as healthy pigs outside of the proposed 500-meter radius may be slaughtered and sold.

The DA chief explained that with the bigger radius, only 13 percent of the 210,000 pigs culled by the government were sick or infected by ASF, while some 190,000 are healthy.

“In a meeting with hog commercial leaders, they [asked] me if we can review the 1-7-10 protocol, particularly the 1-km [depopulation] radius. So, let’s study [changes in the] protocol,” Dar said in his speech during the first day of the International Farmers Summit in Pasay City.

“Only 13 percent of the depopulated pigs are sick, the number of healty pigs is higher. If they can still be slaughtered then it would have higher economic value,” he added.

Dar said he will instruct the DA’s ASF Crisis Management Team to review the protocol. He did not give a specific time line for its review.

The agriculture chief also appealed to private veterinarians to zero in on the proposal as they are experts on the matter.

“This [proposal] is being presented to the veterinarians. Are there other countries that have implemented [the proposed protocol]?” asked  Dar.

“The only important thing is that the pigs do not go outside of the infected zones. So, we will sit down, and study that proposal,” Mende told reporters in an interview.

Industry stakeholders and experts said a huge cut in the country’s pork supply may cause spikes in prices.

In a presentation during the plenary summit, Mende said the spread of the fatal hog disease, if left unchecked, could wipe out more than half of the country’s pig herd or almost 8 million heads. This projection was made by the PVDA in partnership with the local hog
industry stakeholders.

“That is what will happen if we will do nothing to control ASF, and just let it spread across the country,” he said.

As a way of easing the pressure on pork supply, Dar said the government is promoting the production of rabbit meat as an alternative protein source, particularly for Filipinos who do not want to eat pork due to the ASF scare.

Dar said the production of rabbit meat involves a shorter cycle compared to that of  livestock or poultry, and it is cheaper than chicken.

“We are supportive of the rabbit industry. We are serious [about this]. Poultry is the No. 1 option, but rabbit meat is part of our basket of options,” he said.

CONSIDERING how perilous their line of work is, most members of the media today feel more threatened by the impact of the coronavirus disease 2019 (Covid-19) pandemic than the usual risks they face while doing their jobs out in the field. “Living dangerously is the...
Read more
Top News

By Rachel Adams-Heard | Bloomberg News COVID-19 is increasingly a disease of the young, with the message to stay home for the sake of older loved ones wearing off as the pandemic wears on. The dropping age of the infected is becoming...
Read more
Top News

President Rodrigo R. Duterte on Friday vowed there will be no whitewash in the ongoing investigation regarding the death of four soldiers in Jolo, Sulu, earlier this week. During his speech in Zamboanga City, Duterte said he will hold accountable the nine policemen, who are...
Read more
Top News

As part of BusinessMirror’s campaign to promote everyone’s safety and well-being during the global health crisis caused by the COVID-19 pandemic, we have invited established and independent artists to perform at least one song in their own homes while urging everyone to stay indoors. EJ De Perio is a...
Read more
Top News

CHINA has been imposing air, and even maritime, travel restrictions against other countries, especially the weaker ones that include the Philippines, in the South China Sea (SCS) for years, but has not officially declared its enforcement of its air defense identification zone (ADIZ), perhaps for the sake of...
Read more
Top News

THE era of mass tourism is over. As far as Gov. Jose Ch. Alvarez is concerned, tourists for Palawan will be “selective, targeted, prioritized.” Last year, he said, the entire province recorded some 1.5 million in tourist arrivals. In a news briefing live from El...
Read more
Top News

By Philip Marcelo | The Associated Press BOSTON—When Mahdi Hashemian was looking for a bicycle for his seven-year-old daughter Zeynab last week, the Cambridge, Massachusetts, resident decided to skip his local cycle shops in favor of a Black-owned one a few miles away in Boston’s...
Read more
Top News

U.S. unemployment falls to 11% but new shutdowns are under way

WASHINGTON—US unemployment fell to 11.1 percent in June as the economy added a solid 4.8 million jobs, the government reported Thursday. But the job-market recovery may already be faltering because of a new round of closings and layoffs triggered by a resurgence of the coronavirus.
Read more
Top News

SMC opens its own Covid-19 testing lab for 70,000 people in its work force

SAN Miguel Corp. (SMC) has opened Better World Edsa, a facility housing the company’s own state-of-the-art Covid-19 RT-PCR testing laboratory which aims to test some 70,000 employees in its network, in order to unburden the health sector and help ensure a safe return-to-work strategy in the coming months.
Read more
- Advertisement -

CONSIDERING how perilous their line of work is,...
Read more
Top News