Why pineapples is good for your health

‘TWO of my siblings developed cancer in their 40s: one has survived breast cancer, the other succumbed to colon...
Read more

Every day, cervical cancer kills 12 Filipino women. To think, the deaths could have been avoided and prevented.  As a...
Read more

Why pineapples is good for your health

Fruit is food, drink and medicine, neatly packed by nature in attractive, handy and easy-to-open containers. It has sustained...
Read more

NOT really a vegetable, the mushroom is among the most nutritious and popular foods. The ancient civilizations of Egypt,...
Read more

Are eggs good for your health?

THE big question that still baffles man: Which comes first, the egg or the chicken?  Most scientists say, the chicken....
Read more

TB: Still deadly as ever

PLASTICS, which used to be one of the most useful discoveries of modern society, has become today’s scourge. They...
Read more 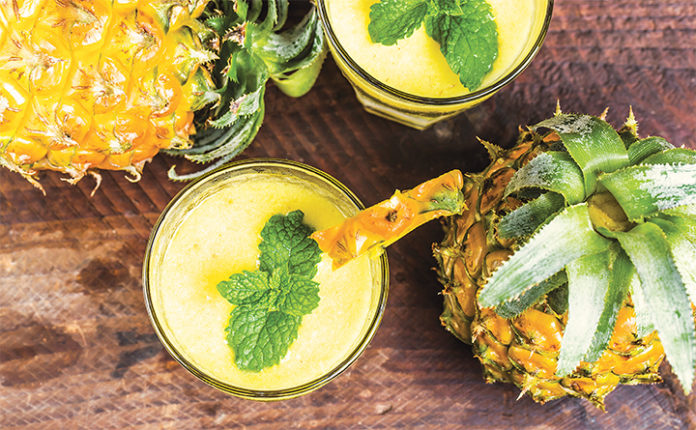 Fruit is food, drink and medicine, neatly packed by nature in attractive, handy and easy-to-open containers. It has sustained man in good health since he first had wit enough to reach out and accept the precious gift.

Some fruits have been grown on this planet long before recorded history.  Others have evolved and improved over the centuries, to such a degree that past generations would never recognize them in their present form, while few fruits are of fairly recent origin.

The medical properties of fruits have been the subject of interest among noted herbalists and physicians of old, who have recommended them for their dietary and remedial virtues with a certainty based on custom, observation and limited scientific knowledge.

As medicine, fruits are generally safer, cheaper and available any time, of the year. Pineapple is one of those that people should eat regularly, as the fruit is rich in vitamins, enzymes and antioxidants.

Medical News Today reported that one cup of fresh pineapple chunks contains approximately 82 calories, 0.2 grams of fat, 2 milligrams of sodium, 21.65 grams of carbohydrates (including 16 grams of sugar and 2.3 grams of fiber), and 0.89 grams of protein. You don’t get any cholesterol from eating pineapple.

As a percentage of a person’s daily requirements, the same amount of fresh pineapple chunks provides 131 percent of vitamin C, 2 percent  of vitamin A, 2 percent  of calcium, and 3 percent  of iron.  The fruit is also a source of the following vitamins and minerals: thiamin, riboflavin, vitamin B6, folate, pantothenic acid, magnesium, potassium, and beta carotene and other antioxidants.

Pineapple is also rich in bromelain, an enzyme that helps the body digest proteins.  As such, together with the fiber and water content, pineapple helps prevent constipation and promotes regularity and a healthy digest tract.

“Bromelain also reduces inflammatory immune cells, called cytokines, which damage the digestive tract lining,” noted Medical News Today, adding that most of the bromelain are concentrated in the inedible stems of pineapple.

Pineapple is also an essential fruit for treating diarrhea.  “Studies indicate that pineapple plays a significant role in alleviating diarrhea and ameliorating gut health in individuals,” explained Jen Miller, author of an article, “Health Benefits of Pineapple Based on Science.” “Treating diarrhea, as well as preventing such gut infections that cause bloating, vomiting and gas in children and adults, can be administered with the help of pineapple, which is high in antioxidants and dietary fiber.”

According to Miller, bromelain is important for the body’s proper functioning. “When you consume pineapples on a regular basis, bromelain is directly absorbed into the bloodstream, which helps reduce proteolytic and fibrinolytic activity.  This prevents excessive blood clotting by allowing proper blood flow from the heart to other vital organs in the body.”

Some research has suggested that bromelain in pineapple can help to reduce the risk of cardiovascular conditions such as thrombosis.  “However, more research is required before a clear link between pineapple and heart health can be established,” reminds Nicola Shubrook, an accredited member of the British Association for Applied Nutrition and Nutritional Therapy.

As pineapple contains no cholesterol, it is also good for those who want to lose weight.  “Pineapple contains high amounts of dietary fiber that positively affect weight loss and weight management in individuals,” Miller wrote.  “Any fruits that increases, the body’s fat-burning capacity are metabolism boosters.  Pineapple is one such tropical fruit high in nutrients that regulate fast recovery and metabolic activities.”

But what is most interesting about pineapple is that they may help inhibit growth of harmful cancer cells.  “With the combination of vitamin C and other healthy antioxidants that pineapple contains, different types of cancer, including stomach cancer, breast cancer and colon cancer, may be prevented,” Miller stated.

Vitamin C plays a big part in hindering some cancers. “Vitamin C is proven to restrict the formation of carcinogenic compounds that are directly related to stomach cancer and gastric cancer,” Miller wrote.  “It also helps fight the kind of bacteria that causes stomach cancer due to vitamin C deficiency.”

Diabetes is now very common among Filipinos.  Pineapple is one of those fruits that diabetics must eat. “Individuals with type 1 diabetes who consume high-fiber diets tend to have lower blood-glucose levels, and individuals with type 2 diabetes may have improved blood sugar, lipids and insulin levels,” the Medical News Today said.

Antioxidant-rich pineapple has been shown to improve both male and female fertility. “The leading cause of infertility is oxidative stress,” Miller pointed out. “Free-radical damage dramatically affects the reproductive organs. Other factors also include eating disorders, smoking, age-related effects and an unhealthy lifestyle. All these factors also influence oxidative stress in the body.”

All these can be counteracted by pineapple, as it contains most of the essential vitamins and minerals.  “All nutrients [found in pineapple] play an important role in reducing oxidative stress in the reproductive system,” Miller stressed.

One of the problems a person getting older experiences is macular degeneration, which is vision loss.  Pineapple has been shown to lower a person’s risk of vision loss.  “Pineapple can help reduce the risk of macular degeneration due in part to its high amount of vitamin C and the antioxidants it contains,” said Laura Flores, an American nutritionist based in San Diego, California.

Just a word of warning: Bromelain found in pineapple can be hazardous to someone suffering from certain protein deficiencies or disorders. Pineapples should also not be consumed by those with hemophilia or by those with kidney or liver disease, as it may reduce the time taken to coagulate a consumer’s blood.

When unripe, the pineapple is not only inedible but poisonous, irritating the throat and acting as a drastic purgative. Excessive consumption of pineapple cores has caused the formation of fiber balls (bezoars) in the digestive tract.

Women who want to get pregnant should not eat pineapple.  In some parts of the world, the flesh of very young fruits is deliberately ingested to achieve abortion (a little with honey on three successive mornings).

Pineapple, is not a native of the Philippines. It is believed to have originated from Brazil, where tribal peoples have always regarded pineapple highly and have used it as a staple food and as an ingredient in some wines. When early explorers brought the pineapple back to Europe, its sweetness and unusual appearance made the fruit a symbol of royal privilege.

How pineapple got its name is an interesting story.  When Christopher Columbus came across pineapple in 1493 on the island of Guadeloupe, he called it la piña de las Indians (“the pine of the Indies”) because, as he later told Ferdinand and Isabella, they resembled “green pine cones, very sweet and delicious.” The odd name stuck, and pineapples are still called piñas in most Spanish-speaking countries. In fact, the word pineapple originally meant “pine cone” in England.

Can a Covid-19 positive smoker transmit the disease to those who inhale second-hand smoke? “It has been shown in studies that smoking severely weakens the lungs, the primary organ damaged by Covid-19, and that second-hand smoke coming from a Covid-positive...
Health & Fitness

The melody lingers on

Music has been the go-to refuge of many anxious souls during this pandemic. And there’s nothing like a virtual recital of beloved iconic tunes to calm and soothe every lover of good music during these challenging times. In what has turned out to be...
Our Time

Optics is the word