JUST as the issue on changing the Philippines’s capital under the proposed federal government emerged, Manila, led by Mayor Joseph “Erap” E. Estrada, continues to rebuild itself and restore its principal role and image not only as the nation’s first city, but also the Pacific’s gem state recognized the world over since time immemorial. 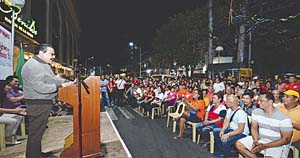 “With your support, Manila is regaining its historical title as the Pearl of the Orient,” Estrada said during the awarding ceremony for the city’s top taxpayers at the Manila Hotel on June 22 as part of the 447th Araw Ng Maynila celebration.

Estrada gave recognition, with plaques of appreciation and trophies, to at least 20 leading companies and realtors that “sincerely and continuously” pay their dues to the local government unit (LGU) of Manila. Recognizing their contributions to the city’s coffers, the mayor expressed his gratitude to them and the entire taxpaying population for helping Manila rise from the ashes by settling the P4.4-billion debts he inherited from the previous administration.

The revenue generated from tax collection has helped lay out numerous projects of the LGU.

Now financially viable and credit-free, the city has seen various infrastructure projects that have benefited millions of its residents.

“We have cemented roads, cleaned esteros, renovated hospitals and health centers and we’re able to purchase state-of-the-art medical equipment and built new school buildings,” Estrada said of some of his achievements in five years since he assumed the mayoralty seat in 2013.

Modern public markets and parks with clean air-conditioned toilets, tertiary-level institutions and street lights are also now in place in most parts of the city.

Likewise, flood control, waste management, disaster preparedness and other programs meant to secure the city and its people from any catastrophic occurrence are provided.

What’s more, various campaigns to address pressing drugs, tourism and cultural concerns, among others, are being carried out by the Estrada administration.

To attract more investments and spur economic activities, policies on ease of doing business and taxpayer services are on hand for business locators.

Amid all the changes he has done in Manila, the mayor remains committed to make more rooms for business ventures, leisure sites and tourist-friendly destinations.

He gave assurance that the money paid by taxpayers will be used to benefit more of the city residents through the creation of more jobs and business opportunities.

“It will boost the city’s income and fund social-service agenda for the benefit of the poorest of the poor,” Erap said.

NOW on his second term and gunning for his third and last stint in the upcoming 2019 national and local elections, Estrada boasts of “big ticket” projects under his leadership, which are expected to create a new map of the city with hundreds of hectares of new land rising from the world-renowned Manila Bay.

These reclamation initiatives in the offing, which serve as his “legacy in the making” for the city, are in synch with President Duterte’s “Build, Build, Build” program. Ongoing until 2022, this massive infrastructure buildup on a national scale has an allocation of more than P8 trillion.

Under Mayor Estrada’s watch, to date, are five colossal proposals in various stages of approval or implementation for reclaiming land in Manila.

First is the so-called Manila Waterfront City a 318-hectare commercial and tourism center along the shorelines of Roxas Boulevard. This mixed-use development project is the fourth big-ticket reclamation project greenlighted during the current city administration in less than two years.

Then, Horizon Manila looms as the largest venture in Manila Bay. It involves building three islands between the Manila-Pasay boundary in the south, and Roxas Boulevard in the east, stretching to about 3.5 kilometers on the edge of the bay.

In June 2017 Estrada forged a memorandum of understanding (MOU) with the Philippine Reclamation Authority and real-estate company J-Bros Construction Corp. for the construction of a P100-billion, 419-hectare commercial district in another portion of the bay.

Also in the pipeline is the P7.4-billion expansion of the Manila Harbour Centre in Tondo by the construction firm R-II Builders Inc.

Finally, the 148-hectare Solar City urban center—long on the drawing board prior to Estrada’s term—is set to commence construction in Manila Bay.

The City Council of Manila finally ratified in January 2017 the consortium agreement and the joint-venture agreement (JVA) signed by the Manila City Hall and Manila Goldcoast Development Corp. (MGDC) on April 7, 2012, and June 7, 2012, respectively.

Solar City is a 148-hectare, state-of-the-art tourism, commercial and residential district to be located in Manila Bay. It will host business hubs, residential and commercial properties, as well as tourism facilities, including an international cruise ship terminal.

Estrada said the city’s land area has remained the same all these years spanning 42.88 square kilometers, from the Spanish regime to the American occupation, Commonwealth era and modern times.

The presence of churches, mosques, houses of worship, government buildings, schools and colleges, both religious and secular, which are all exempted from taxes (although some of them are being run as businesses), adds to the problem in taxation.

He is bullish that once the multibillion-peso projects are completed, they will not only increase the city’s land area to 58.3 square kilometers (5,830 hectares), but also result to quality land that can be another source of revenue.

“All these reclamation projects will redound to the benefit of Manilans, first by providing the city with tremendous increases in real-property tax revenues along with business and corporate taxes, and second, by generating jobs in the various businesses and enterprises for Manila’s jobless and new graduates entering the labor force,” the mayor said.

Increased tax collections, he noted, will be translated into more social services for the city, such as public health care, hospitalization benefits, subsidies for the elderly, cemeteries and schools, feeding programs for children, educational benefits, economic and livelihood opportunities for women, police and security matters, college and university education for residents, and barangay programs, among others.

IN line with its urban renewal program, Manila continues its street-lighting initiative to achieve its goal of setting up 2,938 units of environment-friendly LED lamps across all the streets of the country’s capital.

This multimillion-peso project started since Estrada’s election in 2013. Apart from sustaining his beautification effort for the city, he wanted this to become a deterrent against criminality, saying peace and order are highly needed for any locality to achieve progress and maintain a sustainable and robust economy.

One basic requirement for a peaceful, crime-free community is lighting, in this case, brightening up dark streets and alleys of Manila that have been a long-standing clamor for both the city residents and visitors alike. So a well-lit place discourages the commission of crime while promoting business and tourism, noted the mayor.

Since its inception, the street-lighting project has lighted up the entire city, from major thoroughfares to small barangay roads.

Apart from rolling out the program in these areas, Estrada sees to it that enough lighting facilities are installed in public areas highly frequented by people on a seasonal basis, like Divisoria and Binondo where thousands of Manilans and other residents flock to during Christmas to buy gifts and goods.

In fact in 2016, Estrada personally led the inauguration of 137 brand-new lampposts along Benavidez and Asuncion Streets in the former shopping area. This is because the 1.5-kilometer length of the area was dimly lit then.

The Manila City Hall annually allocates over P100 million for this street-lighting project, which uses LED lamps good for the environment, sturdy and cheap to maintain, durable and reliable in giving the needed illumination in city streets, CEO head Lorenzo Alconera said.

He said they are on track in meeting the target total number of street lights to be installed throughout Manila.

Erap quoted reports from barangay chairmen in the city’s six districts that the project drastically reduced street crimes through the city, particularly at night time.

“Every city street, district, zone and barangay is a priority in our street-lighting program. Each area—whether residential, commercial, industrial, educational, tourist-oriented or religious and historical—is an important part of the city and will not be left out in this effort to light up Manila,” he said.

Rebuilding the country’s premier city and restoring its pivotal role and image as the country’s capital is no mean task as Mayor Estrada knows.

Critics have even filed charges against him for the reforms he would like to implement in Manila, but he remains unfazed and unperturbed.  Manila is a work in progress and he is determined to see it through.

JOINT forces of the Metropolitan Manila Development Authority (MMDA) and Manila Traffic and Parking Bureau (MTPB) on Thursday conducted clearing operations in Manila and removed obstructions, including a makeshift pool, on the stretch of Capulong Street in Tondo. Residents of Capulong Street were taken by surprise upon seeing clearing operations group and anti-illegal parking members arrive and...
Read more
Metro

FOLLOWING its recent success for ranking high in the region’s security index, the local government of Valenzuela received another citation—this time from the Philippine Chamber of Commerce and Industry (PCCI) as one of the “Most Peaceful and Safest Spots in Southeast Asia.” The award was bestowed to the city for “exemplifying commendable initiatives toward good...
Read more
Metro

NOW that the last elections are over, Manila Mayor Joseph E. Estrada expressed confidence that newly elected barangay and Sangguniang Kabataan (SK) leaders will help the city government eradicate illegal drugs and reduce criminality. Estrada said he hopes the new officials will help bring back the city’s former glory and make it drug-free even as...
Read more
Metro

BARELY a week before the local election next week, Quezon City is teeming with suspected flying voters that may have been already “planted” ahead of the Sangguniang Kabataan and barangay elections on Monday. The voters list of Teacher’s Village West in Quezon City obtained by the BusinessMirror on Thursday from a concerned citizen of the area showed hundreds...
Read more
Metro

MUNTINLUPA continues to bring national government services closer to the people as it welcomes the Philippine Statistics Authority’s (PSA) move to locate to Ayala Malls-South Park in Alabang. The PSA relocates to a bigger space at the fourth floor of this establishment to accommodate more clients from the southern part of Metro Manila and other neighboring...
Read more
Metro

DepEd, other government personnel ready for May 14 poll duties

IT’S all systems go as the Department of Education (DepEd), together with other government agencies, deploys personnel trained for an orderly and peaceful conduct of the 2018 barangay and Sangguniang Kabataan (SK) elections. Undersecretary for Administration Alain del Pascua said some DepEd personnel will volunteer to render poll duties on May 14. He also highlighted the efforts of the Department to ensure...
Read more
Metro

THE Makati City government on Thursday launched the Baby Makatizen Program, which aims to promote the welfare of both mother and child through timely birth registration and proper prenatal care, at the Session Hall of Makati City Hall Building I. Makati City Mayor Abigail Binay led the distribution of Baby Makatizen starter bags to 100...
Read more
Metro

WEST Zone concessionaire Maynilad Water Services Inc. (Maynilad) is replacing a total of 290 kilometers of old, leaky pipes this year, in line with its program to upgrade the distribution system and reduce water losses. Once completed, this will bring the total length of pipes replaced within Maynilad’s concession area to 2,285 kilometers or 56 percent...
Read more
- Advertisement -

To fix discrimination, we need to see it

Jerusalem offers a grim model for a post-annexation future